What more can you ask from life? I was given a little angel from heaven.

She is 6 months old today. 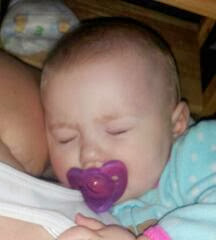 I decided that I wanted turkey enchiladas for dinner. I didn't have any corn tortillas so I stopped by the store after work (11:30 pm)to pick some up. I couldn't see premade ones so I picked up the flour to see how hard it would be to make my own. It didn't look to hard. I asked a sales person if they had any premade ones and he found them for me. I still bought the floor to try making some this weekend. Guess what. I left the premade ones at the store. I wasn't going back tonight. It is way to cold. So I guess I am making homemade corn tortillas tonight at midnight. (I'm crazy) they were easier than I thought they would be. They taste so much better. Here is the finished product on the bottom and tomorrows dinner on top. 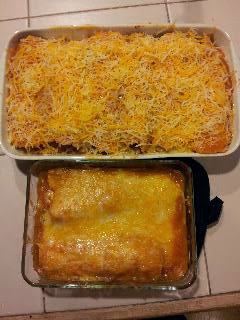 update, they taste AWESOME if I say so myself.
Posted by Mary K at 2:29 AM 1 comment:

Thanksgiving turned out ok. We had a power outage from 8 in the morning until 2 in the afternoon. It wasn't so bad because we had ham that was already precooked and the other stuff only took an hour to make. (yams, corn, gravy, stovetop stuffing and brown and serve rolls). It wasn't so good for a neighbor of mine. She woke up at 7 and put her turkey in the oven, 1 hour later all the power was out. She was not to happy. She ended up having to wait for the transformer by our house to get repaired.

I ended up staying awake because I wanted to go shopping at 5am. I bought the two things I wanted at Bi-Mart then decided to go to Fred Meyers for free coffee and donuts. Of course I had to buy their 50 percent off socks for everybody in the house except for my poor daughter Shay, who has no socks. Isn't that the way it usually happens.

To keep up with the shopping fever, I went to a Goodwil outlet store. This is where all the things that don't sell at the regular stores will go to for final sale by the pound. I ended up getting forty mens 100% cotton shirts and a tall dresser for $27.00 total. I also bought this. A 35 x 52 wool crazy quilt. It is so cool. It was yelling at me, "over here, over here!". This is the 3rd quilt I have bought there. The dresser was $5 and the rest turned out to be about 50 cents each.
I am in the process of cutting up the shirts for quilts. My daughters boyfriend ended up getting 3 of them because he needed them for work and little David got one and a set of PJs that I found too. Olivia also received a little pink outfit. Again Poor Shay didn't get anything.
I am going to have to take her out for a shopping spree for her. She loves going there. First we will go though the closet to remove some before we bring more in.

I hope everyone had a nice holiday. 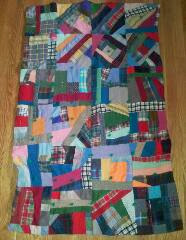 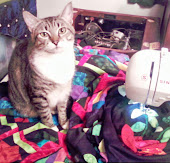